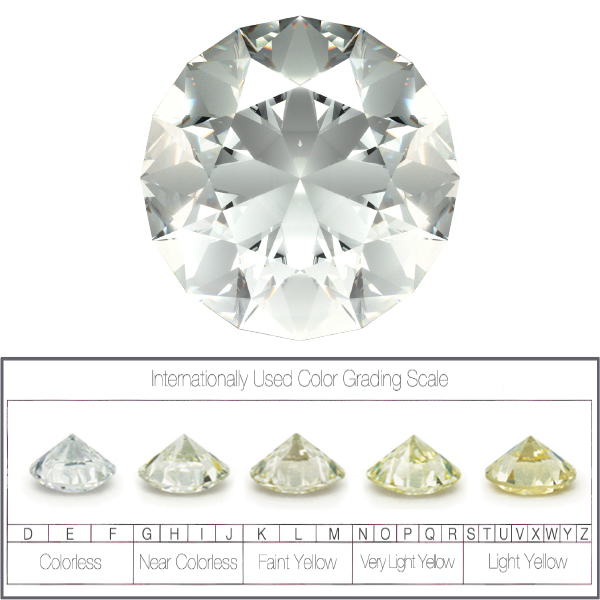 The price of Colourless Diamonds is available at any time from websites such as Rapaport, GemWorld, Blue Nile and James Allen, to name a few.

Colourless Diamonds are most commonly used in engagement rings as well as maternity & eternity rings.

The most desirable diamond has no colour and is graded based on the absence of it.

Grading diamonds is difficult and requires a minimum of two qualified Diamond Graders to complete the process accurately.

All diamonds whether colourless or fancy coloured are graded based on the 4C’s:

When grading diamonds for colour (or absence of) the grading scale ranges from D being completely colourless to Z being light yellow. Anything with a more vivid yellow colour is classified as Fancy Coloured.

The Colourless Diamonds are graded facing down (pointy side up) and looking through the side of the diamond.

The colour grading can be divided in five sections;

D, E & F are within the colourless range;

G, H, I & J are within the near colourless range;

K, L & M are within the slightly tinted range or faint yellow;

Many jewellery pieces are set with colourless diamonds along with precious & semi-precious gems, including rubies, sapphires, emeralds, amethysts, agates, pearls & opals to name a few. Diamonds of all colours have a high sparkle and can be found in over 100 different shapes.

Over 100 years later, on 16 November 2015, a 1,109ct white/colourless diamond was found by the Canadian Lucara Diamond Corp in the Karowe mine in Botswana, South Africa and was later named Lesedi La Rona, meaning “Our Light” in Botswana’s Tswana language. This is the largest gem-quality rough diamond which has been discovered in over a century, and is the largest gem-quality diamond today. The Lesedi La Rona is the size of a tennis ball, and according to the GIA (Gemmological Institute of America) is of exceptional transparency and quality.

This diamond was on display at the Sotheby’s 29th June auction in London, however failed to sell. It was expected to reach $US70 million however the bidding only reached $US61 million and for the time being will be kept by the Lucara Diamond Corporation in Canada.

813ct rough colourless diamond later named Constellation, was also discovered at the same time as the Lesedi La Rona. However, this diamond was sold in May 2016 at Sotheby’s for $63 million ($77,649 per carat).  90% is owned by the Dubai based Nemesis International DMCC company and the other 10% is owned by Lucara Diamond Corporation.