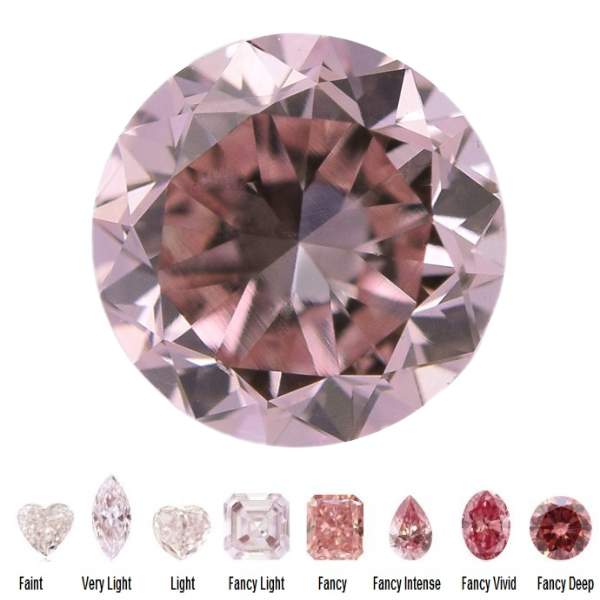 The more intense the colour of the diamond the rarer and more expensive it is.

The colours range from the palest pink to the most vivid red.

A 0.30ct Si2 Round Cut Diamond from the Argyle mine in Australia, graded as 1BP by Argyle and Natural Fancy Vivid Purple Pink by GIA was available on 8th December 2017 for around AUD$115,000

A 0.32ct SI1 Round Cut Diamond from the Argyle mine in Australia, graded as 6PR by Argyle and Natural Fancy Intense Pink by GIA was available on 8th December 2017 for around AUD$32,500

A 0.30ct Si2 Round Cut Diamond from the Argyle mine in Australia, graded as PC1 by Argyle and Natural Fancy Light Pink by GIA was available on 8thDecemeber 2017 for around AUD$8,500

The Australian Argyle Mine is the biggest producer of pink to red diamonds and approximately 95% of the worlds production comes from here.

As the worlds demand increases the supply decreases making this diamond more and more desirable and expensive.

A 0.32ct VVS1 Round Pink Diamond was graded by Argyle as a 7PR-Light Pink Rose, and by GIA as a Fancy Light Pink.

GIA colour grades the Pink Diamonds by listing the intensity of the colour followed by the most dominant colour.

The last colour mentioned is the most dominant colour.

The size and clarity remain the same.

Argyle uses P for Pink; PP for Purple Pink; PR for Pink Rose and PC for Pink Champagne and a scale of 1 to 9 for the depth of colour, 1 being the most vivid and 9 being almost colourless.

Unlike the other Pink Diamonds, the depth of colour for the pink champagne is measured on a scale of 1 to 3, 3 being the most vivid and 1 being almost colourless.

Most diamonds get their colour from the surrounding environment in which they are found. The Pink Diamond however, gets its colour purely from the high pressure and temperature beneath the earth’s surface, as a result, making it a rare gem.

The Sotheby’s May 16, 2017 Geneva auction had on display the 16ct Pear Cut VVS2 Fancy Intense Pink diamond known as the “Artemis Pink” expected to sell for $12.5 million to $18 million. Together with the Artemis Pink was the Apollo Blue, a 14.54ct Pear Cut Internally Flawless Fancy Vivid Blue diamond expected to sell for $38 million to $50 million. These two diamonds were sold together to an anonymous buyer for US$57,425,478 (AUD$76,502,439)

On 4th April 2017, at the Sotheby’s Hong Kong Auction, a pink oval diamond, The Pink Star, with an estimated value of more than US$60million, was sold for US$71.2million

The Pink Star, a 59.6ct Oval Mix-Cut Pink Diamond, was graded by GIA as Fancy Vivid Pink, Internally Flawless, and also known as the Steinmetz Pink, has now been renamed to CTF Pink Star due to new ownership.

In 1999 DeBeer mined a 132.5ct Pink Diamond in South Africa. Out of this rough, over a 20-month period, Steinmetz Diamonds cut an oval pink diamond weighing 59.6ct and unveiled it in a public ceremony in Monaco in 2003. This diamond was then displayed at the Smithsonian’s “The Splendor of Diamonds” exhibit.

Every year, Argyle offers its top 50 to 60 Pink Diamonds in a sealed bid tender. What this means is that companies offer a price of how much they are willing to pay without knowing what ​the other companies have stated. After all the offers have been made, the company with the best offer receives the diamond.

On the rare occasion, a red or a blue diamond can be on offer. The tender opens in Perth then in Hong Kong, Tokyo, Mumbai, New York, London and concludes in Geneva where the bids are opened. Prices usually go over US$100,000 per carat.